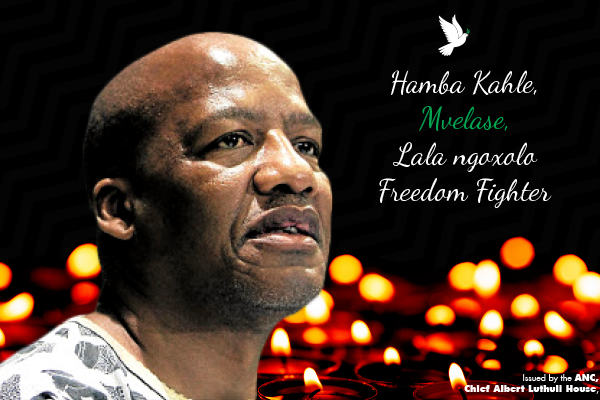 Tribute by The ANC Treasurer General, Paul Mshatile, on the occasion of the Memorial Service of the late Comrade Jackson Mthembu

Sis Thembi; the wife of Comrade Jackson, the children and the grandchild; the entire Mthembu family, relatives, family friends and loved ones;

The leadership of ANC Women’s League, the ANC Youth League and the ANC Veterans League;

The leadership of COSAS, SASCO, YCL and the PYA;

Premiers, MECs and Members of Legislatures;

Members of the media;

I wish to also acknowledge all the speakers that spoke before me, paying tribute to our beloved Comrade Jackson Mthembu.

On behalf of the African National Congress – its leadership and entire membership – I wish to take this opportunity, once again, to send our deepest condolences to Sis Thembi; the wife of Comrade Jackson, the children and the grandchild; the entire Mthembu family, relatives, family friends and loved ones. Bonke abakwa Mvelase.

We wish you strength and fortitude during this difficult period.

We know it is not easy to come to terms with the loss of a loved one.

However, we hope our words of comfort during this memorial service, will plaster your gaping wounds and comfort you in the knowledge that: Comrade Jackson touched many lives, in a positive way.

He inspired many. He comforted many.

He provided wise and valuable counsel to many.

He lifted many as he was rising.

He illuminated the path for many.

His was indeed an exemplary life, worthy of emulation.

His was a truly inspirational journey.

Accordingly, we too share in the deep pain that has engulfed the family.

Your loss, as a family, is our loss too.

We are proud to claim Comrade Jackson as one of our own.

Indeed, we, in the African National Congress, take pride in the fact that we can count patriots of the caliber of Comrade Jackson Mthembu as part of our movement.

Such patriots give us the assurance that we stand on the shoulders of morally upright men and women of courage and principle; that ours is a just and noble cause; and that our movement – the African National Congress – is without doubt a glorious movement.

We will always remember Comrade Jackson as a kind, humble and gracious leader who always put others before himself.

We will also remember him as a lifelong foot-soldier for the freedom of the people of South Africa.

We will never forget his passion for the cause of building a better life for all.

We will remember him as highly competent servant of the people.

Mvelase loved his country, his movement – the African National Congress –and his people.

He was faithful and loyal to the end.

He drew respect and admiration from across the political divide.

With great courage, calm and humility he never hesitated to speak up, firmly, for what he believed in.

He always stood on the side of truth.

He spoke and acted honestly and truthfully.

To us he will remain a national hero, a patriot and one of the foremost servant leaders of the people of South Africa.

He leaves behind a proud, towering legacy.

History will record that from the dusty streets of Witbank; eMalahleni, rose a young and determined activist who refused to accept anything less than what every South African deserves: a decent life, freedom, democracy and equality.

Future generations will learn of Comrade Jackson who was among those who heeded the call of the liberation movement, under the leadership of the ANC, to swell the ranks of grassroots formations in the fight against apartheid tyranny.

Being the well rounded cadre that he was, Comrade Jackson, was part of the student, youth, labor and civic movement.

It was owing to his militancy that Mthembu, as he was fondly known to us, was expelled at the University of Fort Hare thus not being able to complete his tertiary education.

His political acumen, bravery and commitment to the cause for liberation, propelled him to the leadership of United Democratic Front, as its Assistant Regional Secretary in the then Southern Transvaal.

At that time, I was the Regional Secretary of the UDF Southern Transvaal.

I worked very closely with Comrade Jackson as my assistant, under the capable leadership of Mama Albertina Sisulu who was our Chairperson.

Comrade Jackson was committed to participating in grassroots structures.

He was a man of the people.

When we were working together in the UDF, I encouraged him to come and live in Alexandra Township, and he agreed.

This allowed him to participate in local structures, something he was passionate about.

Comrade Jackson focused on building core organisations of the UDF to which he belonged at one point or another.

He was a leading member of the Witbank Civic Association and also led the local branches of the National Education Crisis and the Detainees Parents’ Support Committees; both affiliates of the UDF.

Comrade Jackson was also tasked with leading a campaign in solidarity with SWAPO in Namibia, by co-ordinating more than 200 minibus taxis to transport voters during the first democratic elections in

He was also part of the underground machinery of our liberation movement.

He remained resolute; firm in his belief that freedom will be achieved in our lifetime.

After liberation in 1994, Comrade Jackson went back to participate in ANC structures in Mpumalanga province.

He served the province of Mpumalanga as a Member of the Provincial Executive.

He also served as an MEC under the successive Premierships of Dr Mathews Phosa and Thabang Makwetla.

He has been a member of the National Executive Committee of the ANC since 2007.

His clarity on and understanding of the history of the ANC, its policies, values and traditions led to him being given the important task of being the voice and public face of the ANC as its spokesperson.

In this role he led our movement in the crucial battle of ideas and hegemony.

Owing to his professionalism and commitment, he won many key aerial battles for our movement.

When he went to Parliament he was saddled with the task of steering the political programme of the ANC as the Chief Whip.

At the time of his passing Comrade Jackson had taken another challenging task of being the voice and face of government; including being our nation’s face in dealing with the Coronavirus pandemic – which unfortunately claimed his life.

To us Comrade Jackson’s life will always be synonymous with the objectives of the struggle for a better life for all.

In honour of Comrade Jackson, let us redouble our efforts to build a capable, developmental state able to respond effectively to the daily struggles of our people.

In particular, let us build an efficient, caring, compassionate government – a government of the people, for the people and by the people.

Equally, let us work hard to renew and unite Comrade Jackson’s movement to which he dedicated all his adult life; the African National Congress.

Comrade Jackson would want us to continue building an ethical, caring and listening ANC that is firmly rooted among the people.

This is an ANC that is not arrogant and socially distant from the masses of our people.

Let us also be unwavering in our commitment, as the ANC, to lead the ongoing struggle for radical socio-economic transformation, whose progressive content includes:

Equally, there is no better tribute to Comrade Jackson and many like him, than for us to intensify the fight against gender based violence, femicide, and the abuse of women, children and young girls.

Let us be single-minded in our efforts to champion the cause of the victims of gender based violence.

In particular, let us be unrelenting in mobilizing men and boys in the fight against gender based violence, as well as patriarchal and sexist attitudes and practices.

Comrades, let ours be the generation that will finally put an end to the scourge of gender-based violence, femicide, and the abuse of women, children and young girls.

We must also ensure greater financial and economic inclusion of women; as well as accelerate their economic emancipation.

Like Comrade Jackson did, let us also play our part in strengthening our country’s response to the COVID-19 pandemic.

This includes the wearing of masks at all times in public, washing and sanitizing our hands regularly, as well as avoiding crowded places and events.

We thank our frontline health care workers who are at the cutting edge of our war against the pandemic.

They face a daily threat of infection and losing their lives.

We also applaud progress made by our government in securing and rolling out the COVID-19 vaccine as speedily and as equitably as possible.

Whilst waiting for the vaccine, we urge our people to continue to strictly observe the restrictions aimed at curbing the spread of COVID-19.

To the family of Comrade Jackson we say; we will forever be grateful for sharing with us a life that became so priceless and central to our objectives as a movement and as a country.

Comrade Jackson’s legacy of hard work, approachability and selflessness will remain forever engraved in our hearts and minds.

Fellow compatriots, the Lion of the East has bowed out. He shall roar no more.

As we bid this humble giant farewell, let us defiantly ask the question: death, cruel death, where is thy sting?

Let us also declare boldly that: death be not proud, for in us the spirit of Comrade Jackson will continue to live on.

You leave behind a nation, a movement – the African National Congress – and a family proud of what you did.

You have run a successful race.

For you, it is mission accomplished!

We will miss you.