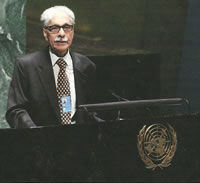 Nelson Mandela was very much a part of the history of the Special Committee and its Secretariat arm, the Centre against Apartheid- and they were, in a small way, a part of his life.

The UN General Assembly decided to establish the Special Committee by resolution 1761 on 6 November 1962. The next day, Nelson Mandela, speaking from the dock at his trial, said that South Africa`s efforts to keep the African people in perpetual subordination must and will fail, as South Africa was out of step with the rest of the civilized world as shown by the General Assembly resolution.

World opinion and international action were extremely important for the morale of the freedom fighters of South Africa.

But resolution 1761 had been adopted by only 67 votes with 16 against and 23 abstentions. Not a single Western country voted for the resolution.

The Special Committee and the Centre led the effort to secure widest support to the cause for which Mandela was to spend 28 years in prison. The Committee became, as Mandela said on his visit to the United Nations in June 1990, \”a very important instrument in our struggle\”.

The Special Committee was the first United Nations committee in which the Western Powers declined to accept membership. It was generally expected to be ineffective in dealing with the \”perennial problem\” of apartheid. I was appointed Principal Secretary in March 1963. In the 1970s, when the Centre against Apartheid was established, I was appointed its Director and later Assistant Secretary-General of the United Nations.

When the Special Committee began its work in April 1963, the situation in South Africa was alarming. The African people had become increasingly convinced that a purely legal and non-violent struggle was no longer tenable. Umkhonto we Sizwe, the military wing of the ANC under the leadership of Nelson Mandela, carried out hundreds of acts of sabotage, while taking care to avoid loss of lives. Poqo, associated with the Pan Africanist Congress, resorted to acts of violence. The African Resistance Movement, set up by some white Liberals, also undertook sabotage.

The government responded with more repression, casting aside the rule of law and permitting detention and widespread torture of opponents of apartheid.

Diallo Telli of Guinea, who was elected Chairman of the Committee, declared at the first meeting that the reviews by the Committee must be a basis for action by the United Nations and Member States. The Committee decided to invite communications with relevant information and to hear petitioners. It heard an ANC delegation, as well as Patrick Duncan, who was then with the PAC, in July.

The Committee was action-oriented from its inception, though its initial mandate was only to review developments in South Africa.

Soon after it began its work, it submitted two special reports proposing that the Security Council discuss the situation and take effective measures, including an arms embargo..

The Summit Conference of Independent African States, held in Addis Ababa in May 1963, approved the report of the Special Committee and chose four African Foreign Ministers to represent the Continent before the Security Council.

The Security Council decided in August to recommend an arms embargo. The United States announced an embargo even before the resolution. Britain followed next year when a Labour Government came to power.

A major achievement of the Special Committee in its first year was General Assembly resolution 1881 of 11 October 1963.

Nelson Mandela and his colleagues were brought before the court on 8 October in what came to be known as the Rivonia trial. Within a few hours, on the proposal of Diallo Telli, the Special Political Committee of the General Assembly took up the question of apartheid and heard Oliver Tambo, the head of the external mission of the ANC.

Fifty-five delegations co-sponsored a draft resolution to call on the South African Government to abandon the Rivonia trial and release all political prisoners. It was adopted by the General Assembly on 11 October by 106 votes, with only South Africa voting against.

That resolution was a landmark in isolating the apartheid regime.

For the next nine months, the Special Committee concentrated on efforts to save the lives of the Rivonia accused while pressing the case for effective sanctions against South Africa.

We were relieved that Nelson Mandela and others were spared death sentences so that they could become an inspiration even behind bars and lead the country after liberation.

By 1965, however, the Government was able to deal a severe blow to the liberation movements. Most of their leaders were in prison, restriction or exile. The movements required several years to revive their underground structures.

During this period, the Special Committee helped greatly to keep the issue alive.

But we were faced with a deadlock on sanctions. After the arms embargo by the United States in 1963 and by the Labour Government in Britain in 1964, the major Western Powers were unwilling to take any more measures against South Africa. France, in fact, became a major supplier of arms to South Africa.

The Special Committee had to formulate a long-term strategy to persuade the major Western Powers to impose sanctions, and to build the broadest coalition of governments and NGOs to isolate apartheid South Africa and assist the liberation movement.

The Committee launched an \”international campaign against apartheid under the auspices of the United Nations\” with the endorsement of the General Assembly in 1966.

The campaign was based on the recognition that apartheid was of concern to the entire world, that it should not be treated as a cold war issue, and that the United Nations had a vital interest in securing the elimination of apartheid.

The Committee made patient efforts to secure the cooperation of the smaller Western countries and thereby isolate the Powers which had extensive economic interests in South Africa and treated its regime as an ally in the cold war.

The Nordic countries were the first to respond, supporting sanctions in principle and contributing generously to funds for assistance to South Africans. They were followed by other Western States. By the mid-1980s, most resolutions were adopted unanimously or with only two governments, sometimes only one, voting against or abstaining. France had begun to cooperate in action after the election of a Socialist President in 1981.

The Special Committee and the Centre established intimate relations with anti-apartheid and solidarity movements and other NGOs to promote public campaigns to isolate apartheid South Africa in every field, to exert pressure on the recalcitrant governments and to provide political and material assistance to the liberation struggle.

There were campaigns for a sports boycott, cultural boycott, expulsion of South Africa from organizations and conferences, ending emigration of skilled workers to South Africa, – for an arms embargo, an oil embargo and disinvestment from South Africa -involving millions of people around the world. \”People`s sanctions\” had a great impact.

The Special Committee organized or co-sponsored about 40 international conferences and seminars to consult on action. It promoted observance of international days against apartheid.

One of the most important campaigns was the campaign to Free Mandela and other political prisoners.

The Special Committee and the Centre gave widest publicity in different languages for the statement from the dock by Mandela on 20 April 1964 – a statement which moved millions of people.

In 1978, I wrote personal letters to several governments and friends in anti-apartheid movements and other organizations suggesting the observance of the 60th birthday of Nelson Mandela. The response was far beyond any expectations. Ten thousand letters and messages were sent on that day to Mandela in prison and his wife Winnie interned in a remote village.

The Chairman of the Special Committee co-sponsored with the Mayor of Glasgow a declaration by Mayors for the release of Mandela. With the help of United Nations offices around the world, we were able to obtain signatures by two thousand mayors.

The Special Committee and the Centre worked with anti-apartheid groups to promote honours to Mandela by Governments, cities and institutions. The media reported a \”Mandela fever\” in Western Europe.

The numerous honours by governments and institutions to Mandela, a political prisoner, were unprecedented in history.

The campaigns achieved great successes because of the close cooperation of the Special Committee with the Organization of African Unity, the Non-aligned Movement, the Specialized Agencies of the United Nations, anti-apartheid and solidarity movements and many NGOs and individuals.

In 1989, Ibrahim Gambari of Nigeria, then Chairman of the Special Committee, piloted the General Assembly Declaration for a negotiated settlement leading to the transformation of South Africa into a non-racial and democratic State. It was adopted by consensus.

The Special Committee and the Centre contributed greatly to the process of evolution from a divided vote in the General Assembly in 1962 to consensus in 1989.

A New Phenomenon in the United Nations

During this process, the Special Committee and the Centre created many precedents.

In October 1963, during the first visit of Oliver Tambo to the General Assembly, the Special Committee and the Centre hosted a reception in his honour. It was attended by the Secretary-General, and by the ambassadors of the United States and the United Kingdom among others.

A reception in honour of a leader of a liberation movement at the UN Headquarters was unprecedented. Since then, we arranged receptions at the United Nations many times in honour of Oliver Tambo and leaders of anti-apartheid groups.

The Special Committee and the Centre, I would venture to say, became a new phenomenon in the United Nations by their emphasis on action rather than words; by introducing the concept of campaigns by the United Nations; by recognizing the need to supplement diplomatic action by efforts to organize public support; and by imaginative initiatives such as the sponsorship of one of the most impressive art exhibits of the 1980s dedicated to Nelson Mandela.

They recognized that the struggle for freedom was the responsibility and prerogative of the South African people, under the leadership of their liberation movement, and that the role of the United Nations, of Member States and of anti-apartheid movements was secondary. It was to help the South African people in their struggle and to facilitate liberation with the least possible violence and suffering.

They performed their duty with dedication and determination with unshakeable faith in the ultimate victory of the struggle for liberation.