THEME: WOMEN DEFENDING THE REVOLUTION: CELEBRATING THE LIFE OF COMRADE OR TAMBO

The first National Executive Committee (NEC) meeting of the newly elected ANCWL held on 11 September 2015, adopted a program of action (POA ) based on its 12th National Conference resolutions. One of the major reflections that the NEC made was the trajectory of the National Democratic Revolution and the centrality of women in the organisation and in defending it.

As part of the program October is President Oliver Reginald Tambo’s birth month. As ANCWL we chose to celebrate this selfless life, dedicated to the struggle, by marching to defend what this giant of the struggle lived and died for.

President OR Tambo played a major role in the growth and development of the movement and its policies. He is the champion of the emancipation of women. Gender issues took centre stage within the ANC, and a gender desk was established in which he himself participated, thereby installing within the Organisation that gender issues are not women only issues. He epitomized and embodied the National Democratic Revolution and was the face of the revolution, so are all Presidents of the ANC, with President Zuma as current President. He was revered and honoured as President; this is what we have to defend throughout so that the ANC is respected, through its President. An attack on the President is an attack on the ANC, and the Revolution. The President has a right to dignity. The use of freedom of speech as disguise while showing total disrespect should not be allowed.

The ANCWL is an integral part of the ANC; its objectives, amongst others, are; – to spearhead the emancipation of women within the ANCWL and its structures and all levels of government and South African Society as a whole. To promote the all-round development of women and help in building their own confidence and interpret their needs nationally. To promote women’s participation in every sector of public life and to strive for women’s participation in every office. To campaign for an end to all forms of violence against women, children and other vulnerable groups. Looking back from the women’s struggle we can count several milestones that women achieved that changed lives of women in general across society.

We believe that our role is not only to attain the objectives of the National Democratic Revolution, but has also a responsibility to defend the registered fruits and gains of the NDR.

We understand our role of uniting the women behind the ANC, hence we are gathered heretoday, joined hands with women organisations and allies of the movement and civil society organizations to celebrate the life of OR Tambo. This gives us an opportunity to take leadership of society using the unique skill that women only, possess within the Organisation, This year’s commemoration of the life of comrade OR Tambo coincides with the 60th year of the Freedom Charter.

President JG Zuma declared this year as the year of the Freedom Charter, where we take stock of how far we have gone to champion the cause of the revolution.

The Resolutions from the 12th conference of the WL were made in the following areas;- Organizational, renewal, remobilization, reorganizing, and reaffirming WL.

The ANCWL must tackle the issue of sexism in both its objective and subjective elements. The objective manifestation of sexism expresses itself in discrimination against women in socio-economic sphere, resulting in the gross discrimination against women so evident in all aspects of our national life. This results in women being worst victims of the inequalities of our racist legacy.

The struggle against sexism must therefore address the same questions we confront in the struggle against racism. These include poverty and underdevelopment, equitable access to wealth and income, equal rights at the work place, access to the professions, management and skills, and so on.

ANC National Chairperson, Cde @GwedeMantashe1 to lead the #ANCLetsema campaign in Cederberg, West Coast Region. The Letsema Campaign is aimed at placing structures of the ANC at the forefront of community struggles including service delivery & social inclusion. https://t.co/bH9SFecB8n 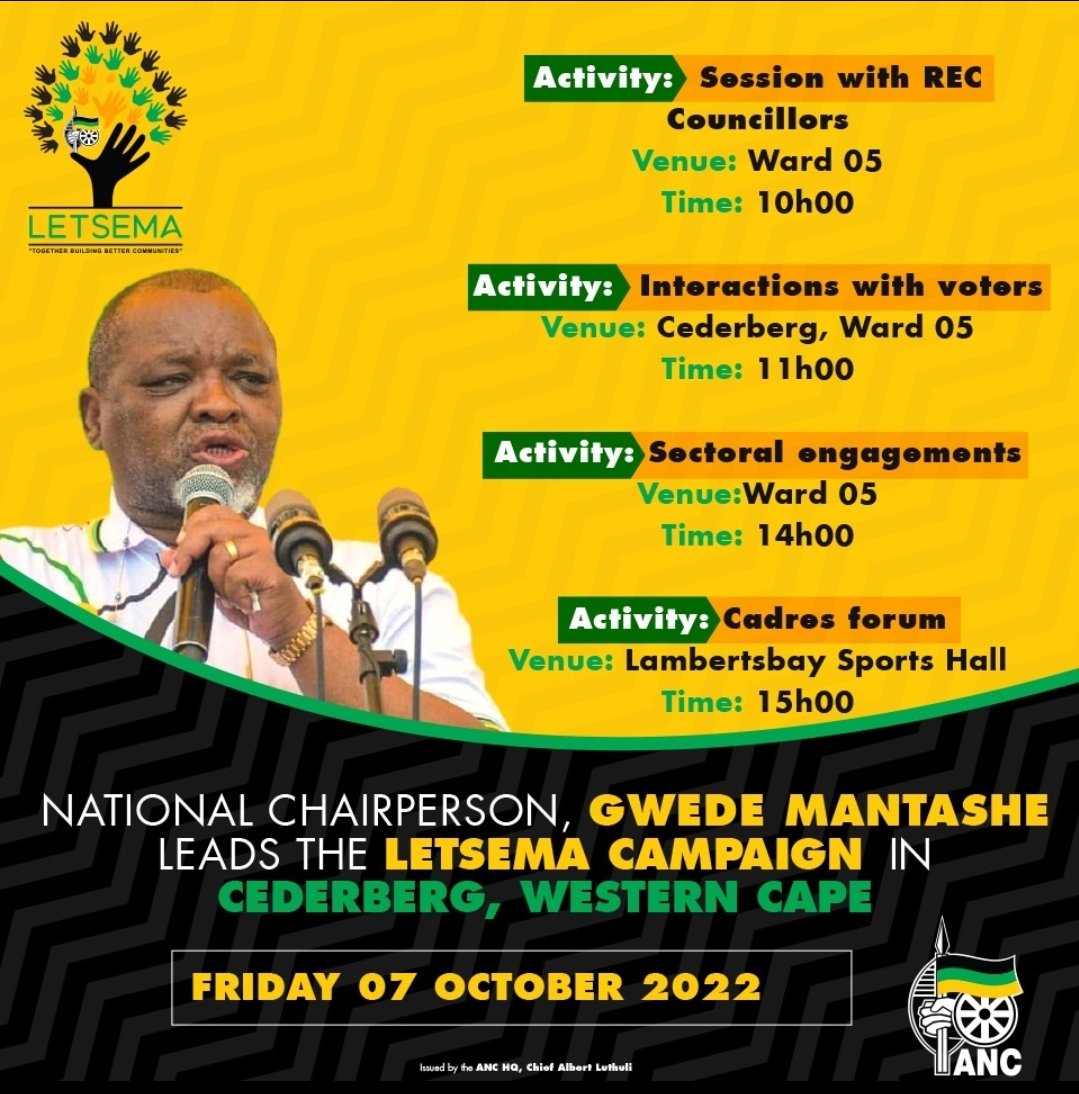 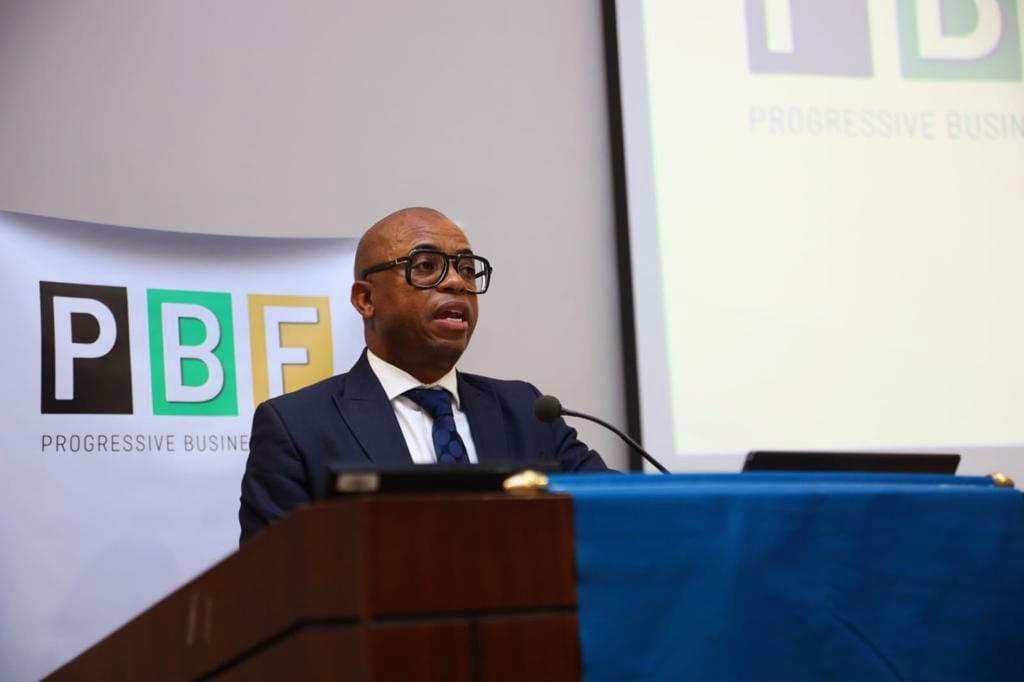 RT @CyrilRamaphosa: Spoke to members of the media after participating in my BGM this afternoon. https://t.co/FgOUVxLLFS

RT @CyrilRamaphosa: The democratic culture of the ANC is not going to be diluted, but rather reconfirmed as we go to conference. https://t.… 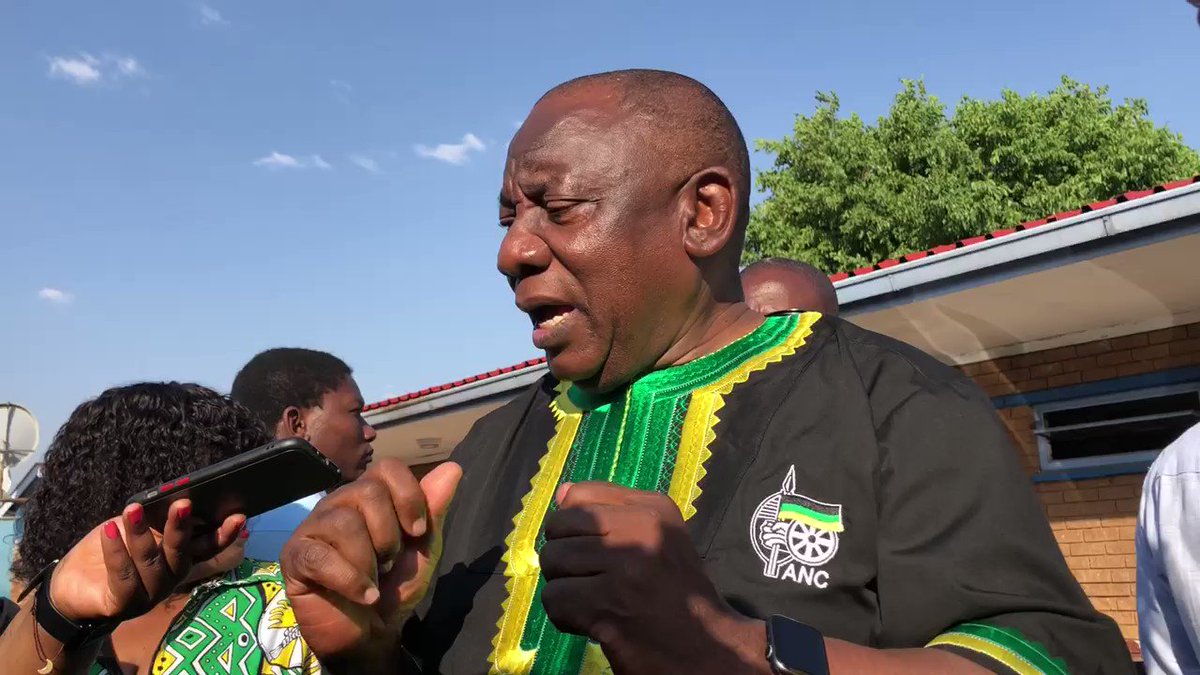